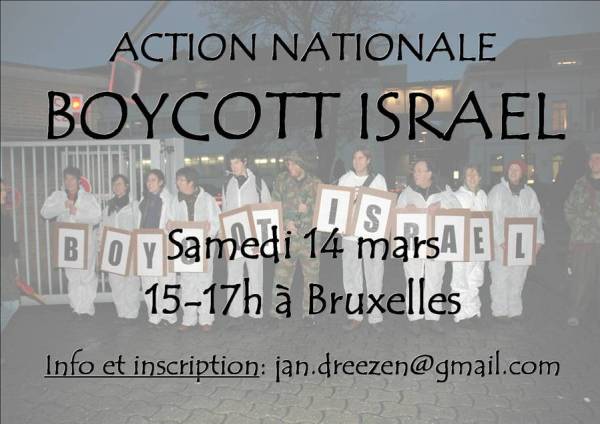 La conférence est sans aucun doute en anglais, mais je poste l’annonce ici pour le cas où cela vous intéresserait. Ilan Pappé vit en Angleterre maintenant.
I would like to invite you to come to the lecture on the 13th of march at the Arenberginstitute in Leuven (Naamsestraat 96) at 3pm given by Prof Ilan Pappé.

Ilan Pappe, born in Haifa in 1954 is currently a Chair in the Department of History, the University of Exeter and a co-director of the Exeter Center for Ethno-Political Studies.

He wrote extensively on the 1948 Naqbah and is regarded as one of Israel `new historians’ who challenged the official Zionist version of events.

Among these, he defends the Palestinian narrative and analysis of the events of the 1948 War. In particular he subscribes to the thesis that Palestinians were intentionally expelled by Yishuv and later Israeli forces in terms of a plan drawn up even before the war.

Extract of his books introduction:

« I am pro forced transfer, I see nothing immoral in it. » David Ben-Gurion said to the Executives of the Jewish Agency, June 1938

On the cold morning of March 10, 1948 a group of eleven men, consisting of Zionist leaders of the old guard and young Jewish military officers, finalized a plan for the ethnic cleansing of Palestine . That same evening military orders were given to the ground units who had to prepare for the systematic expulsion of Palestinians from large parts of the country. The orders contained a detailed description of the methods to be used to forcefully expulse the people: large scale harassment, intimidation; besieging and bombarding villages and population centers; burning houses, country estates and merchandise; expulsion; and, finally, placing mines in the rubble to prevent the displaced residents to return. Each unit had its own list of villages and neighborhoods that together formed the goals of the overall plan. This Plan D (DALET in Hebrew) was the fourth and final version of less comprehensive plans that described the fate that the Zionists had in store for Palestine and therefore for its indigenous people.

Once the decision was taken, it took six months to complete the task. After that time, almost 800,000 people were displaced – more than half of the original Palestinian population – 531 villages were destroyed and eleven urban neighborhoods were emptied of their inhabitants.